The 1929 BSA B29 was brought to us as the previous restorer had for some reason aborted the project and some how, had lost or miss laid a host of parts that the owner never knew were missing on return of the bike in bits. Unfortunately on inspection some very important major parts were missing. The front part of the restoration was to be my favourite bit, the engine. Even though the entire bottom end was built up I thought it prudent to strip it down and cast my eyes over what had been done by the previous restorer “oops”,not much.

The crank on removal was good as well as the big end, even though it had never been taken apart so I dropped it into my paraffin bath to see if this would reveal anything untoward after the thick black oily residues were diluted, it still showed good with no notchyness or slop on the conrod. His bike had never done many miles or it had and the bottom end was rebuilt years ago.

The barrel and head is a one piece item and some very careful honing was needed as the honing stones can grab when they reach the extremities of the barrel due to it converging into the combustion chamber. When I look at a one piece barrel and head all cast as one I find it a marvel that the foundry that make it had such skills that I think have all been lost due to the UK looking abroad for cheaper castings and passing the buck on the effect it had on climate change. There are of course a host of micro foundries in the UK casting non ferrous metals such as aluminium and brass but the non ferrous heavy casting industry has nearly dies a death and is down on its heels.

At our small workshops we used to ever haul loads of foundry equipment such as molding machines and sand sieves and graders for some bid companies.

The piston was missing its small end pin so I looked though my vast stock of old engine parts that would full fill the job, although a little long on length a bit of grinding sorted it out. The missing piston rings were made from close grain cast iron and were fitted with the correct gap. Old small end pins were commonly fitted with what were called buttons, these were pads of aluminium fitted to each open end of the small end pin that controlled the end float, nowadays this end float is controlled by circlips. The buttons when pressed into the ends of the small end pin would have radiuses so as to match the radius of the cylinder bore that the piston rides up and down in. The buttons were made form aluminium grade HE 30, don’t go any softer then say HE 15 or HE 5 as they wont put up with wear. The valve guides are cast into the cylinder head are not replaceable they are an integral part of the cylinder and head casting so some valves with oversize stems were found and fitted to take care of valve guide ear and the valve lengths and heads were modified to fit. Grinding the valves into there respective seats is always necessary.

I don’t want to bore you “the reader” what else was done to the engine as they are not a complex engine being a side valve motor. The petrol oil tank was repaired by me and 2k sprayed by my brother with the correct decals and John Bull rubbers. 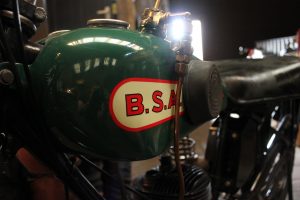 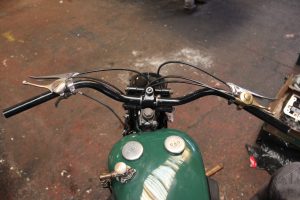 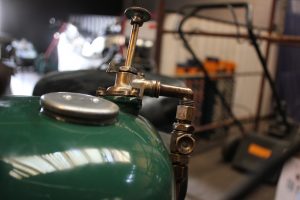 The BSA 3 speed gearbox is a simple affair to overhaul but I managed to get a modern oil seal to fit into the primary side to sort out any impending oil dumps through its original metal mechanical seals.

The precious text detailed a few things that were done to the engine and gearbox. The engine needs marrying up to the gearbox employing engine mounting plates, these were missing so I procured the Bruce Main Smith photo copied manual that was supplied by the owner and found a microscopic view of them. the datum to work from when a major part like this is missing is the primary chain case length, when it is wrapped around the primary gear, on the end of the crank and the clutch drum gear, if you don’t know the chain length you will have to resort in a bit more investigative work. The manual out of interest was concise enough to give the link count of the chain so as to alleviate me from guessing. 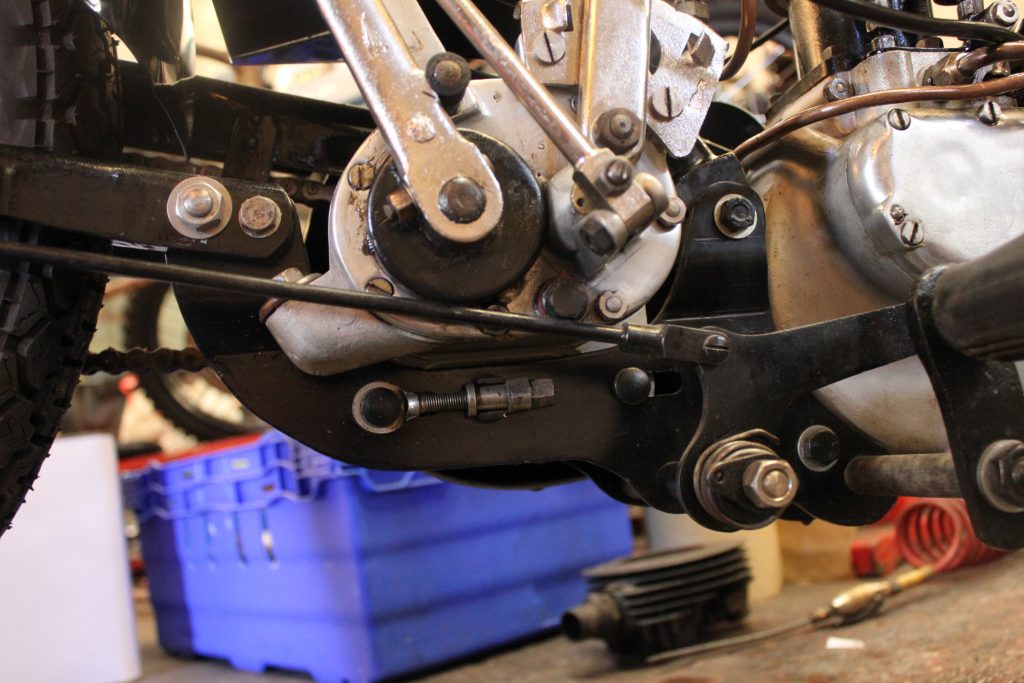 The engine plates not only holds the engine and gearbox in situ but they also act as mounting points for the rear wheel horizontal support stays of which we only had only one of them as the right one was missing so I make the right one as a mirror image of the left but with a bracket welded on to take the rear brake steady bracket. This bike so far would have not become anything but a bag of bits as a lot of ingenuity and a broad know how of the use of sheet metal and milling and turning machines is essential unless your going to entrust it to somebody else to do, but they are only going to make what you draw or give as a pattern and it can’t be done on a CNC or CAD machine, they have to be hand made as if they were prototype parts. 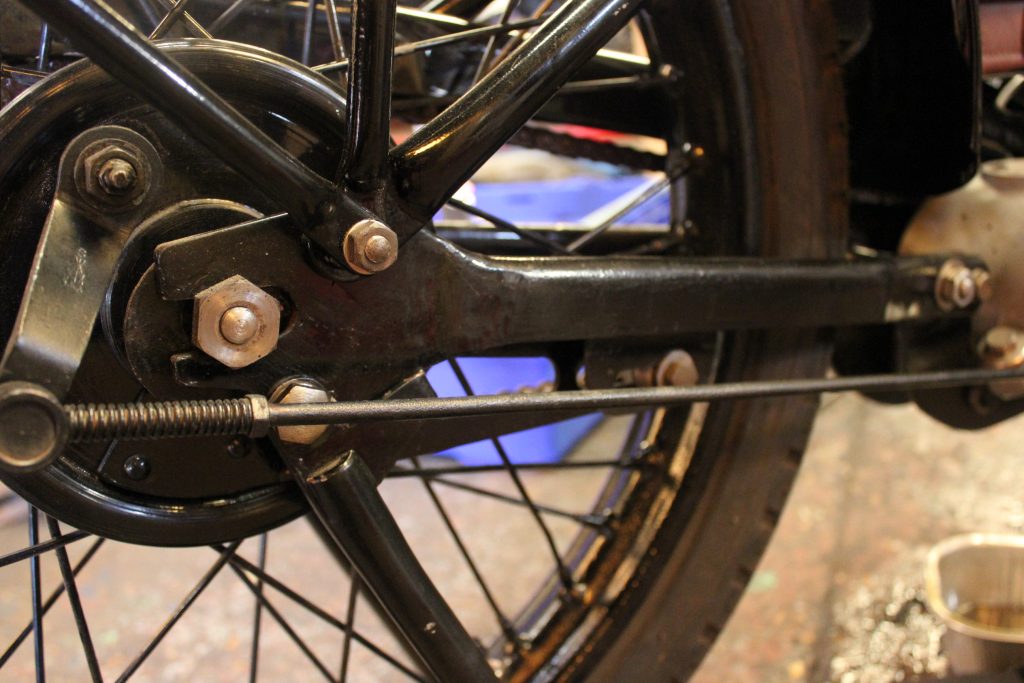 I worked out the engine plates and got the gearbox adjustment slots in the right places according to what I thought. I put the new horizontal support stay and measured the front wheel spindle deck height and applied this height to the rear wheel spindles so as to give me a view of how all the other parts were going to lay and match up. “bingo”, the owner came up with some much needed parts that were missing such as the rear frame that attaches the seat stem to the rear wheel horizontal stays, the seat, the front and rear brake plates, “and what I really needed to tie all the rear components together” the rear mudguard, how can the precious restorer loose so many parts?

leaving me to try and do a cost effective restoration the bingo component were gotten from a chap that was met though the BSA owners club that happened to be restoring his BSA B29 and was wiling to lend out parts to be copied by someone willing to put in the effort of manufacturing them. If you give me a pattern part to make I bet I can do it as I’ve never failed. With the loan of the rear mudguard I could work out how other parts attached to it such as rear rack, toolbox, rear stand strap and number plate and the cut out for the down tube stays in the rear guard.

The brake plates were made from solid discs of mild steel and turned in the lathe to give the exact dimensions as the original loaned ones except I crept in a few modifications that would take care of the older bearings that I had fitted to the wheels, front and back, on inspection you will find in the pictures that even the rear brake anchor plate has been hot riveted and is an exact replica. The wheel spindles were missing so some new ones were made from EN24T steel and are machined to fit into the new bearings. 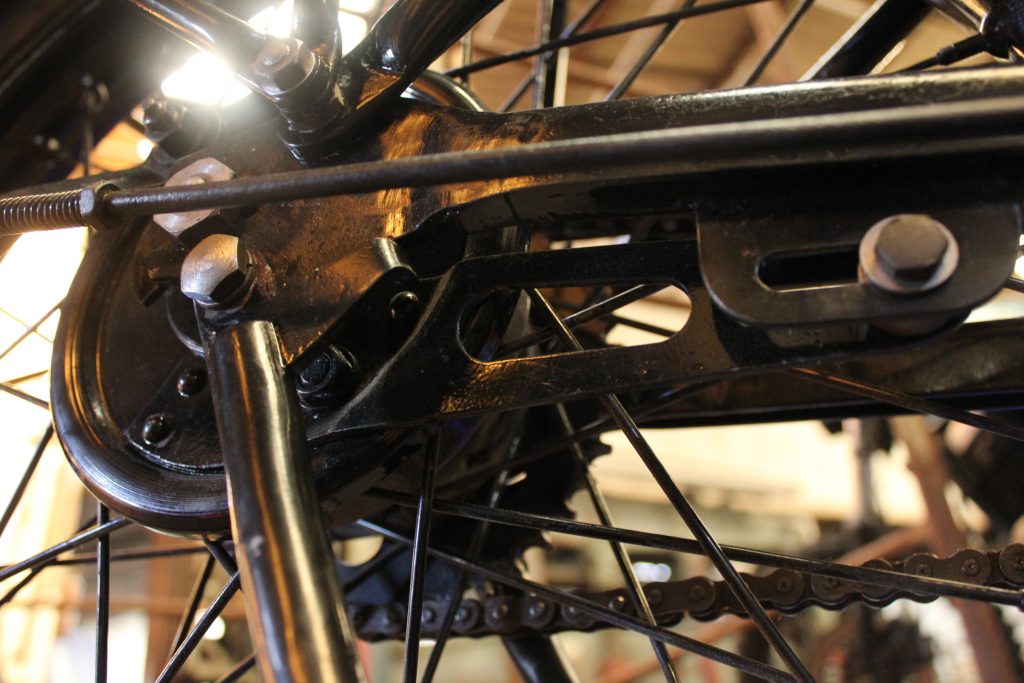 Who would lavish all this detail into replicating parts for an old bike? It starts with the interest from the owner and his passion and passing this, he or she is lucky enough to find somebody with the skills and know how and passion to finish the job, I like a challenge and will see it through the seat that was loaned. It had a riveted sub frame that I had to replicate so as to fit the bike and give the correct period look. A large Lycette saddle cover was bought from Feked and it fitted perfectly. 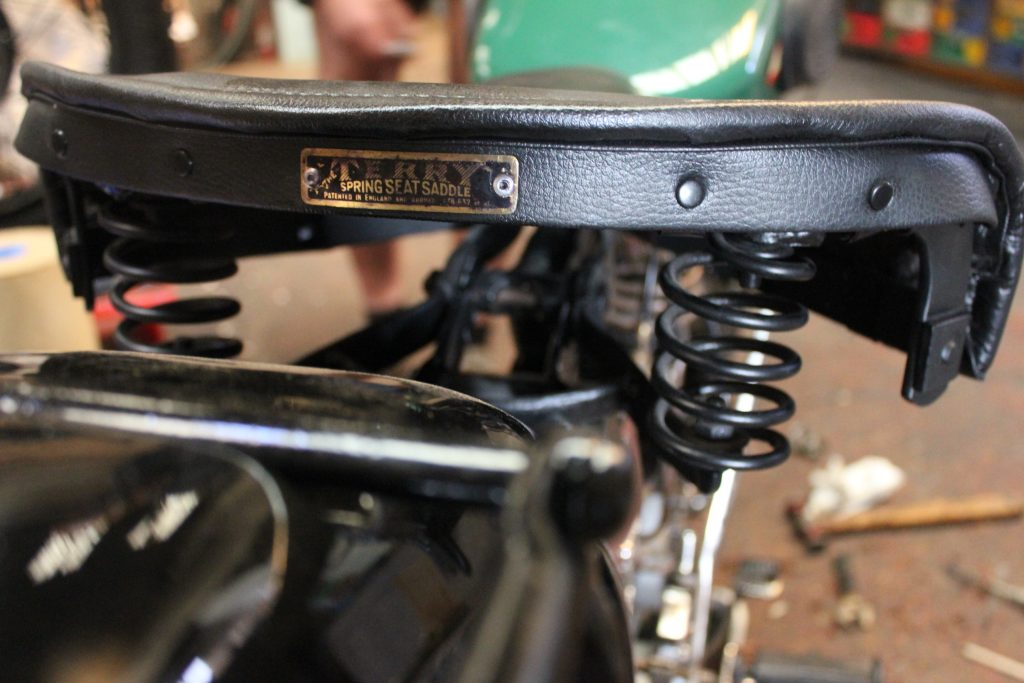 The rear chain that I am sure was original showed more than an inch of stretch over its length. Was changed over to an original Reynolds chain from my stock. The rear sprocket was also missing but the book said it was 42 teeth so I procured one from Supersproc and modified it to fit. The rear stand had disintegrated to such a degree that there wasn’t much to work from but Bruce Main Smiths book saw us all right. The front stand was missing so the same procedure was applied to replicate it. 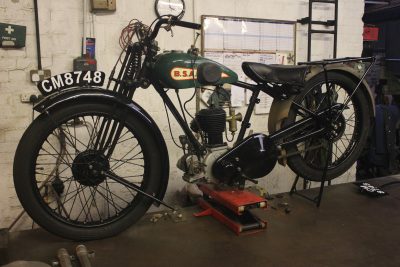 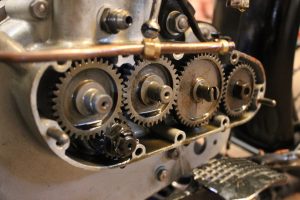 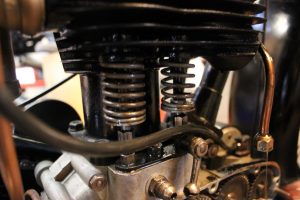 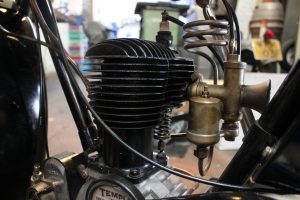 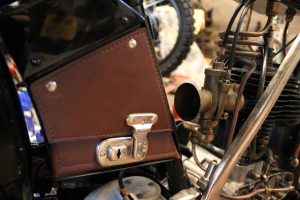 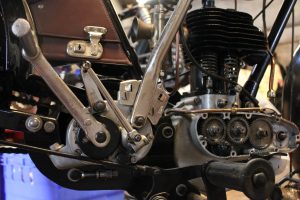 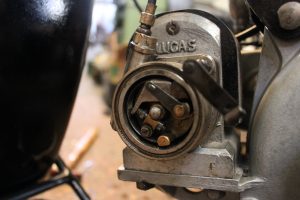 I always fear giving out nickel or chrome plating to anyone else other that a good family friend who usually does it for me but he was too bust to undertake the task so I has to go to a local plater who does excellent work but is as slow as everybody else except my friend. A little bit of plating has held me up on some very experience restoration making me on the final bill for the customer and laten delivery times.

FYI Some of the pictures were taken after completion of the bike then added to the earlier text of this blog.