Here we have a very special Velocette with stacks of provenance, and it was featured in the motorcycle sport magazine in 1967. The owner apparently has had a previously bad experience with another engineering company regarding work carried out on the engine. He found us on the web and read my blogs and decided I was his man.

On delivery of the bike it was found that certain aspects of the engine work had been carried out competently IE, new extra big valves had been fitted held in place with a pair of new valve guides made out of phosphor bronze. The cylinder has been rebored out to plus .02” by the previous company who according to the machines owner shouldn’t have been done as the barrel and piston were perfect, he received the bike without an oversize piston or rings so he sourced some new ones.

The owner was most concerned with the clearance between the valves and piston, exhaust valves rarely cause problems as long as the bigger inlet valve has adequate clearance, there was a selection of shims and spacers made from aluminium to pack the base of the cylinder out to give the requisite clearances, essentially by raising the height of the barrel we are lowering the amount of piston protrusion in the cylinder head, obviously if we do this we are altering the compression ratio. The compression ratio is not of so much a concern but the cam timing, opening and closing times are the thing that counts as these are what decide how much fuel is going to be compressed. A true compression ratio is based on the swept volume being compressed. The swept volume is denoted by the amount of fuel let in by the inlet valve and squashed into the space during compression in the cylinder head just prior to the point of ignition. If you look at the compression ratios of a lot of old bikes in comparison to a lot of modern stuff you will find that they are quite low IE; 6-1 or 7-1 for example, these ratios were quite commonly found on racing machines. But if we take into consideration the fuel and air being compressed then we will get very much higher valves such as 6-1 being actually 11-1. The most important factor is valve to piston clearance, without the correct clearance the engine will be no good with bent valves as there will be no compression.

The gasket and shims were all gathered up and placed under the cylinder, it doesn’t matter what the amassed thickness is as we can always deduct shims or spacers to give our desired clearance for the inlet valve. Here is how I do it, get your piston about 20mm before top dead centre on the compression stroke with the barrel fitted, get some plasticine and roll it into a little snake so as it will lay the piston valve cut outs in the top of the piston. Put the cylinder head in place and bolt it down loosely. Turn the engine over gently and watch the opening and closing of the valves during a complete 4 stroke cycle. Remove the head and look at the thickness of the squished plasticine. If an engine of between 350cc and 500cc is being measured we will be looking at a thickness of .06” after being squished if we have a steel conrod fitted. If an alloy rod is fitted we will strive for .1”.

I am trying to keep my descriptions in a very understandable text, it is difficult to so without going into great detail and the many variable that will be met.

Anyway the thickness of the squashed stuff can be measured and certain gaskets and shims can be removed to give the desired clearances this process is what I had to do. Don’t start with no thin shim and put your plasticine snake in place because it is easier to measure and deduct a figure rather than measure a snake that has been squashed into nothing and find that the engine wont turn over due to the valves bottoming out on to the top of the piston only to find that more shims are needed to give the required clearances, keep your snake on the thick side and use the cheapest plasticine as it is devoid of any abrasive additives.

Previously I noticed that somebody had cut the exhaust valve pocket deeper and wider on the top of the piston marked with an “EX”, as the piston is a mirror image I found it prudent to turn the piston back to front and put the exhaust side valve pocket to the inlet side. This type of engineering smacks of ignorance from the previous engineer but on initial inspection I perceived this with the aid of a ruler. With my bad eyesight I can with experience read .01” by touch.

There are four nuts that screw onto some screw driver slotted studs that hold the head on, we had to make new high tensile steel studs as the threads were loose. The nuts are a bastard to fit unless you have a modified socket to drive them home with great care and vey gradual tightening to attain a cylinder head seal. The crankshaft when fitted into the crankcases will have a preload value of .003” I cannot ascertain this until the engine has been run and bought up to temperature.

A bone of contention regarding Velocette that hadn’t been attended to was the clutch. Need I say more if you’ve owned a Velocette? When set up correctly they are incredibly light in operation but they do need occasional adjustments. I noticed a bit of paper in the box of parts that came with the Velocette that the ignition timing should be set at 45 degrees BTDC. No way can this be so as anything above 43 degrees BTDC will knock the big ends out. I am going to play safe and plum for 38 degrees BTDC. The maximum advance that I have run on any of my bikes is 42 degrees BTDC and they need stripping worn and checking after every race. 38 degrees will be kind to the engine but will give punch, performance and reliability on the road. It should aid in the starting procedure that can be embarrassing when leaving a show. I must admit that I’m not a Velocette lover but I do understand the ethos behind the design. After a massive dose of vermouth I can see where the designer is coming from “let’s make something that nobody can understand and they will have to come back to the Velocette factory to have it fixed properly”.

When Velocettes  were racing in the “TT” they had a factory member to check the vital clutches after practices, “hey what’s going on here” I vow to fit a modern Japanese clutch if someone can give me a donor engine and gearbox. All the above has been completed and I thought I would put a dummy tank in place to start her up. It started after 3 kicks and I hadn’t paid any attention to the choke or advance retard lever. Well she seems to start easily with no choke and no retard but a fully flooded carb and a little throttle and it idles beautifully. 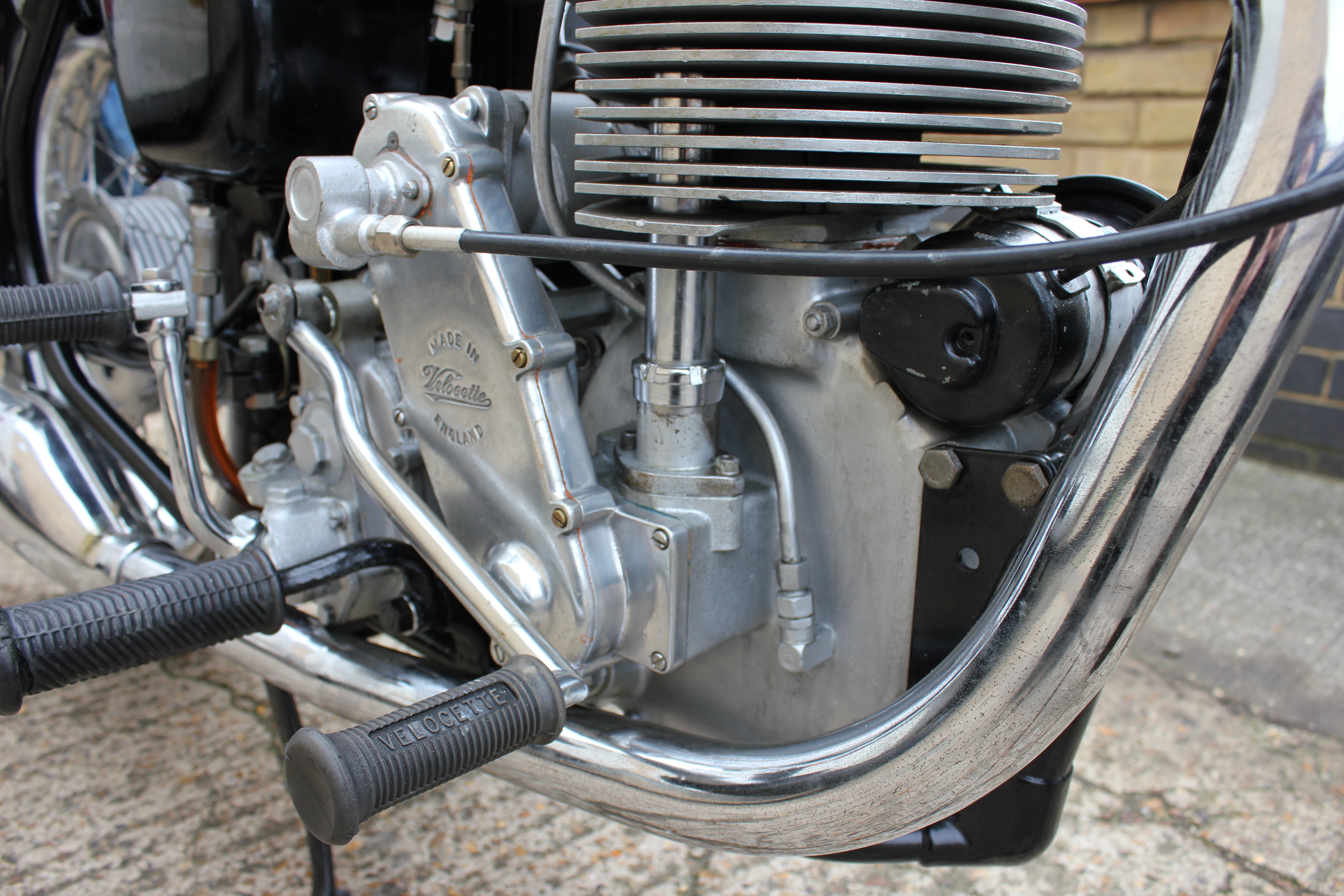 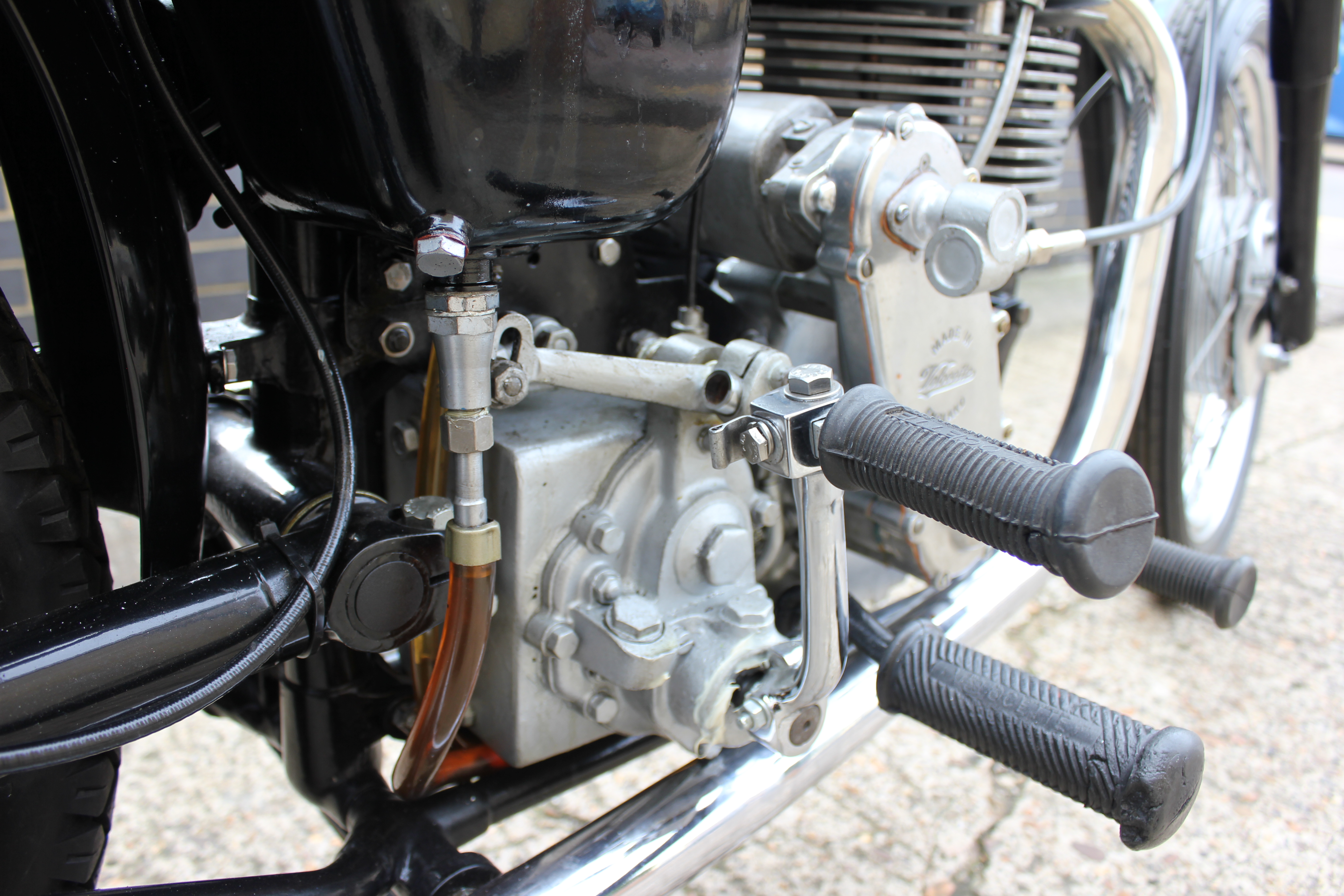 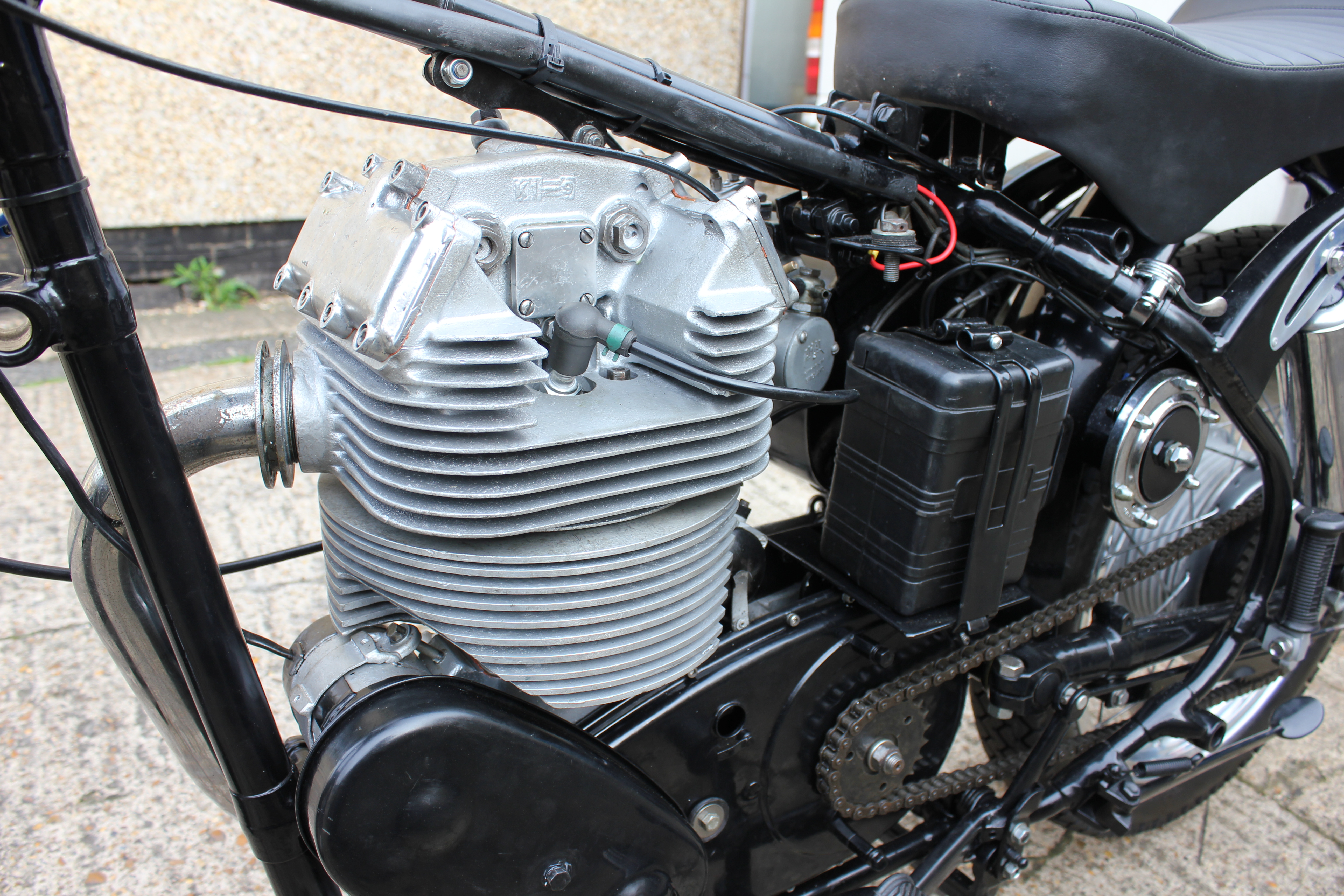 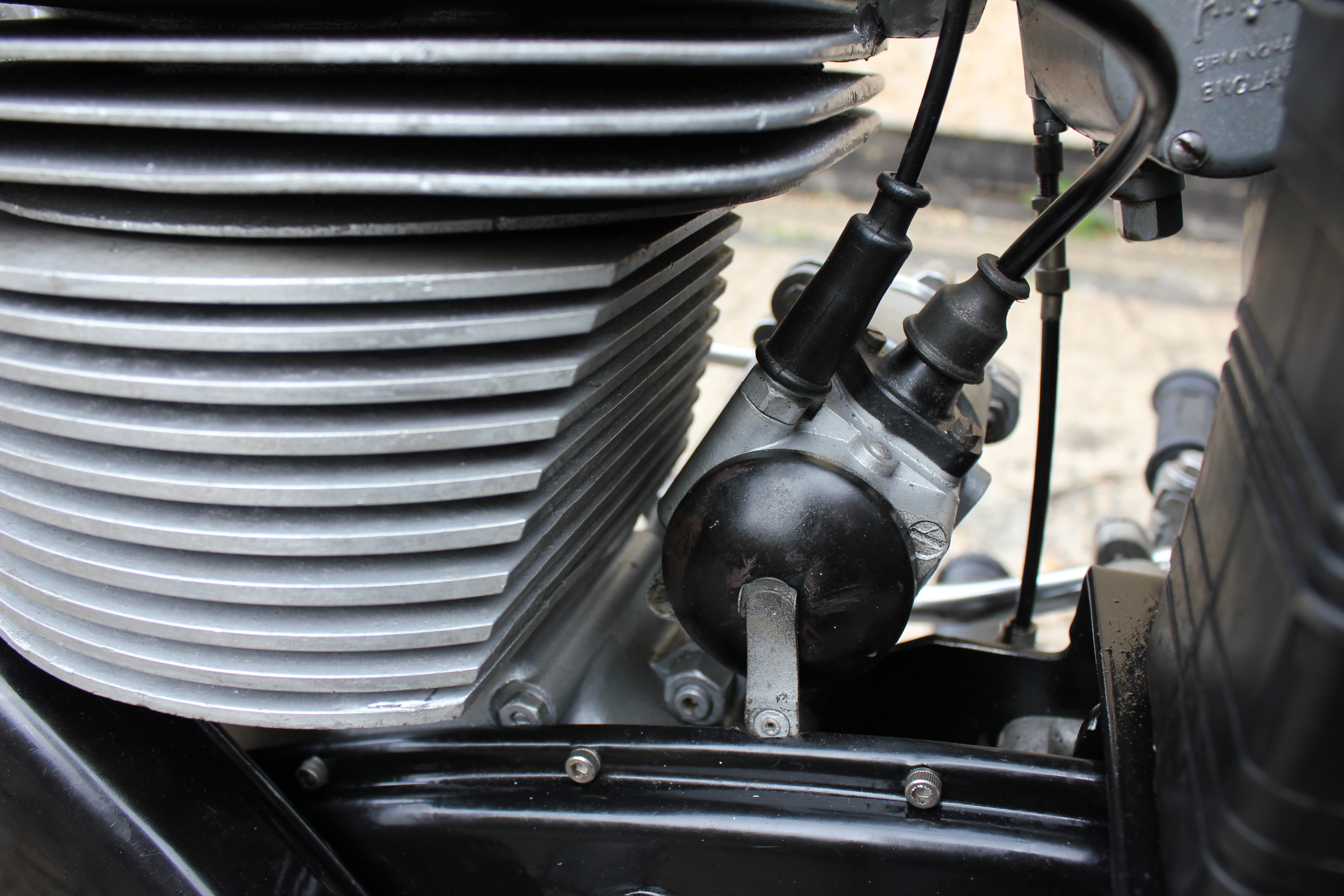 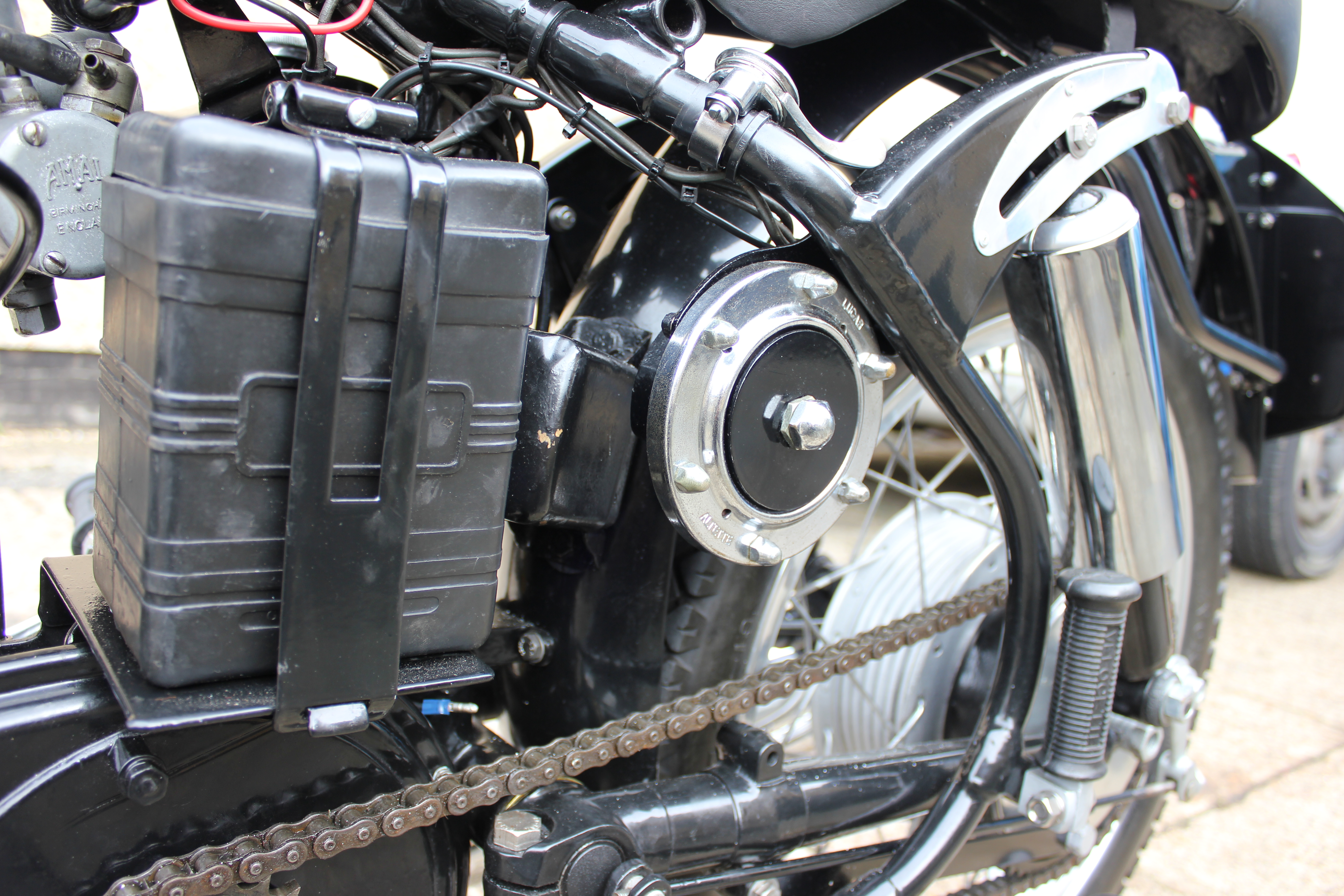 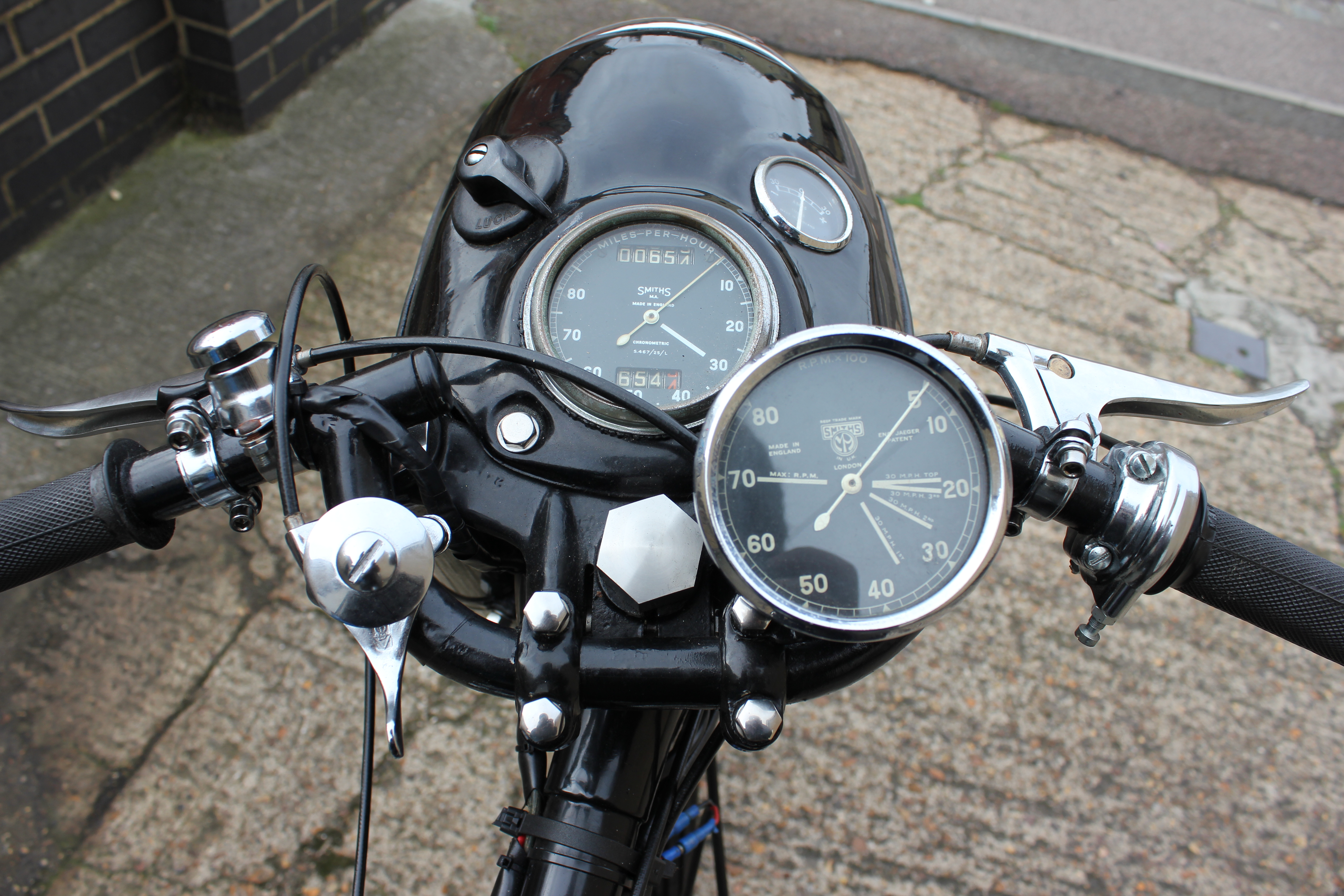 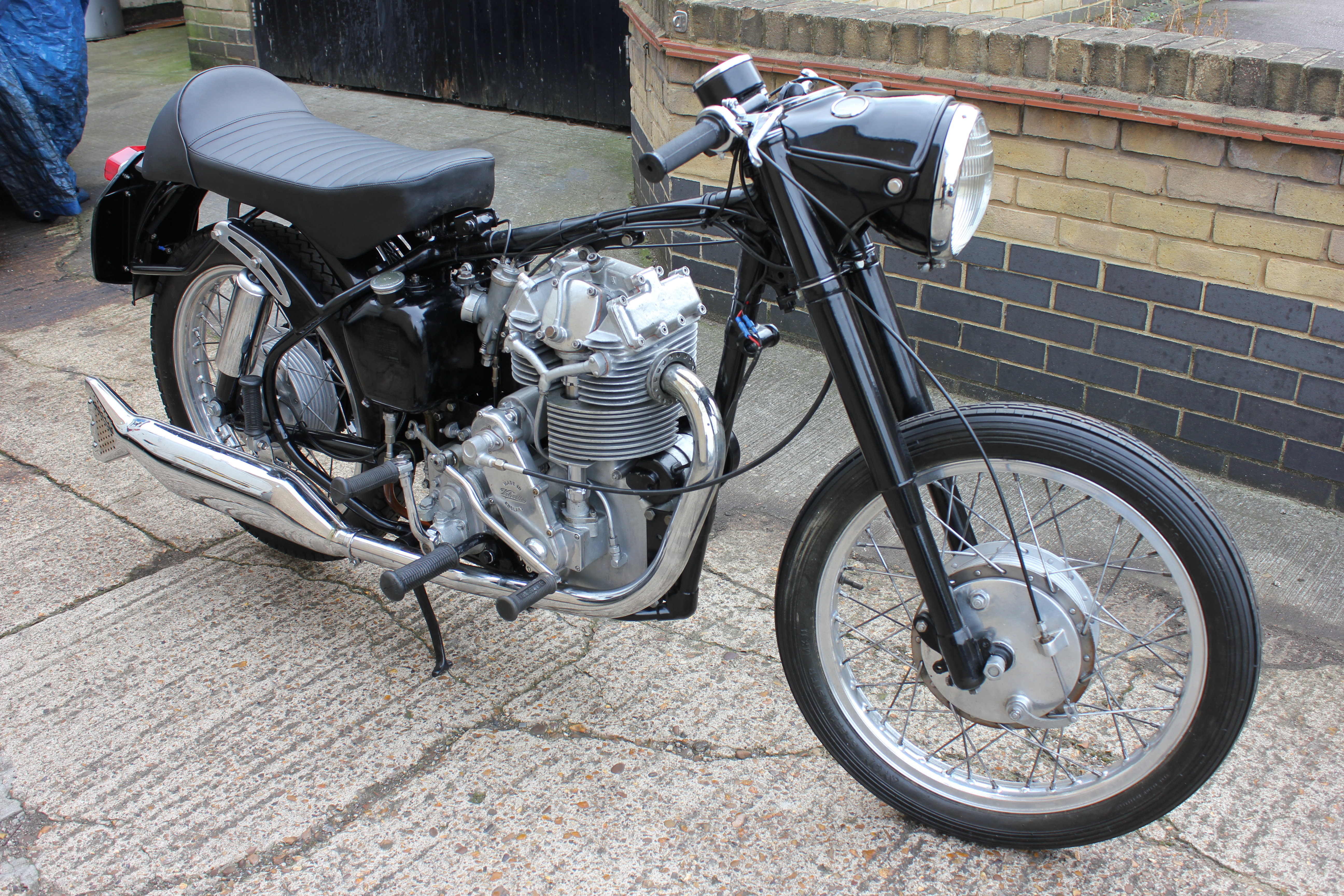 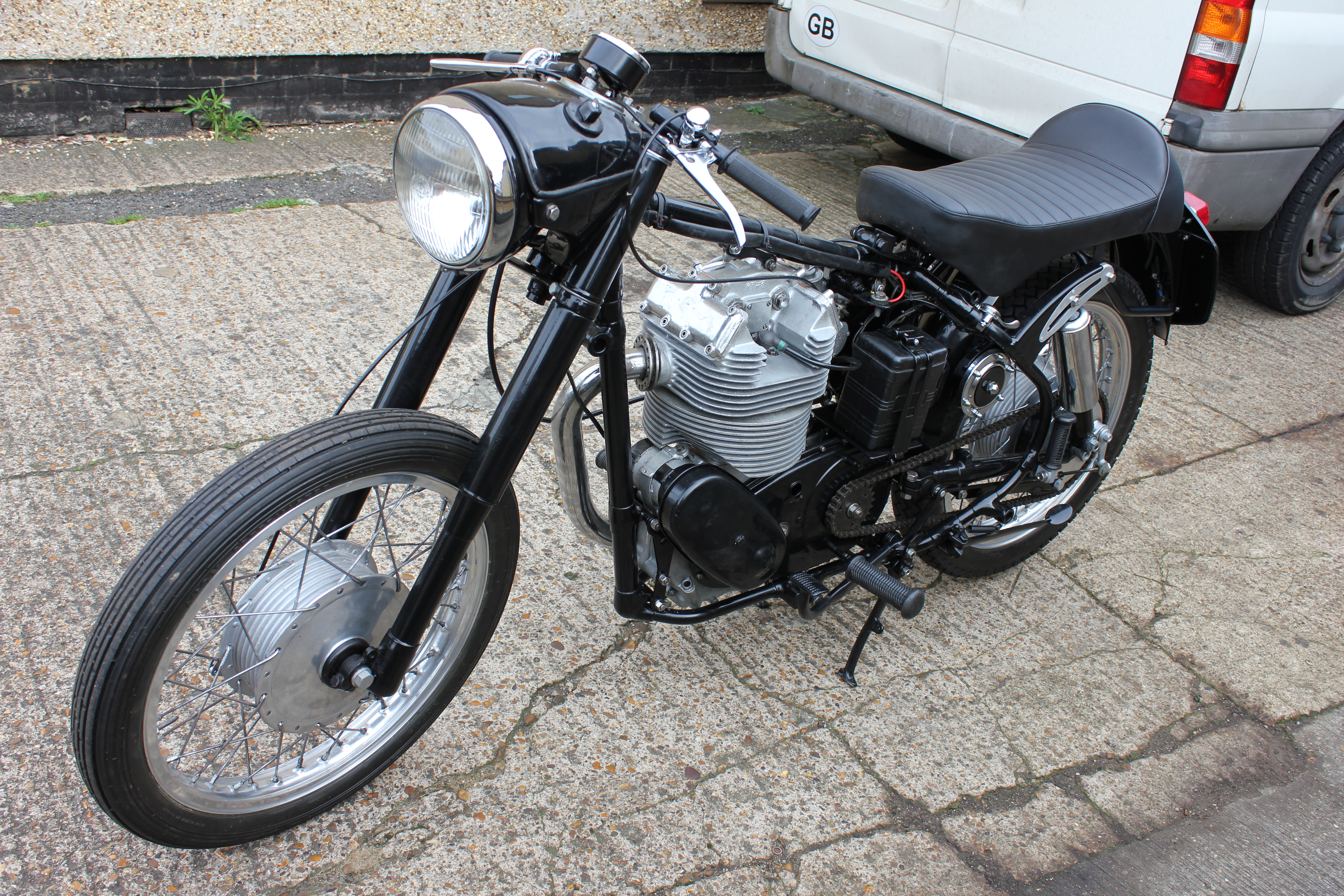 Here is a magazine article on the bike 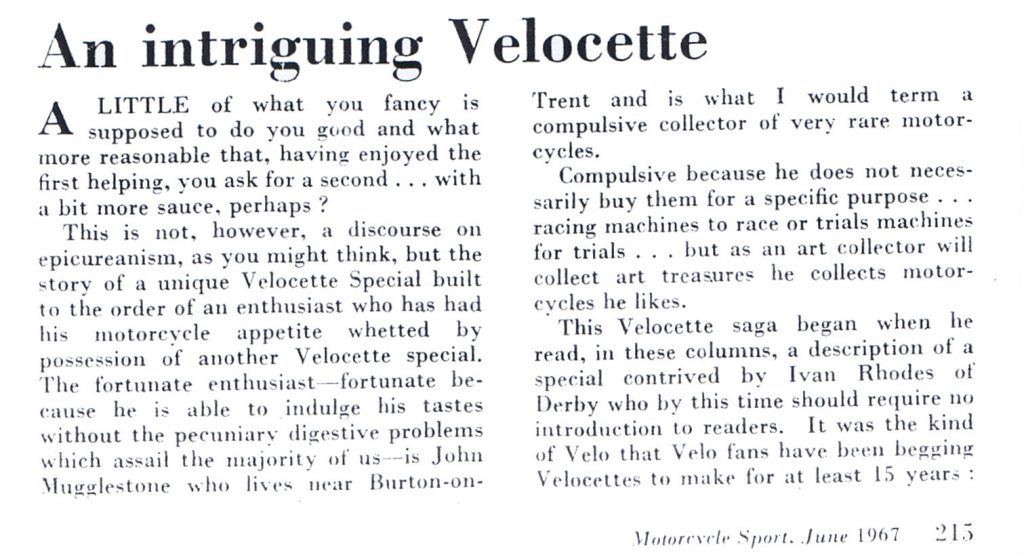 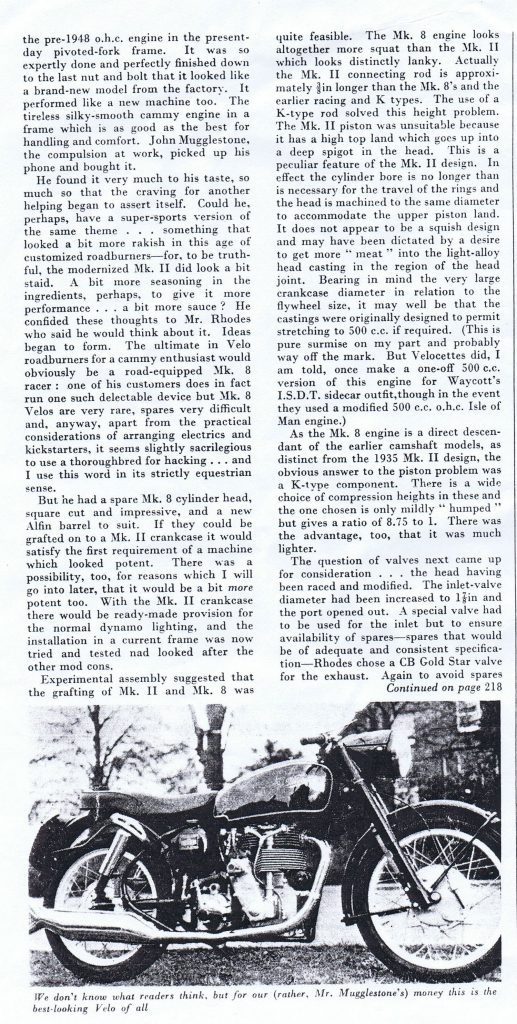