The bicycle in question, ripe for a complete restoration is a 1954 Rory O’Brien racing bicycle. My father purchased the frame and forks for £17.10s unpainted. The frame was manufactured from Reynolds 531 tubing and all the tubing was brazed into ‘Nervex’ lugs. The work was carried out by Les Ephgrave in Dagenham, who built frames for many cycle shops. Dad, being a Romford boy, wanted a top of the range bike as he wanted to do time trialling and racing with his local cycling club. The bicycle was indeed put through its paces until dad went to America where he became a semi-pro golfer with a paid caddie. The bike at this time languished with a neighbour in Collier Row, Romford.

Dad met and married my mum in the USA. They moved back to England, into Necton Rectory, a massive house with a Victorian kitchen, garden surrounded by walls with trained fruit trees and loads of glass houses. The reason why I mention this bit of history is that I was born in 1962, a year after they came back to the UK from the US and after a year of living in the rectory I could distinctly remember a green bicycle in the wine cellars. I was only a little over a year old and was given the freedom to roam throughout the house. Year’s later we moved to another house in letchworth and dad started up an engineering company and was working all the hours under the sun.

I was nine year’s old at this time and interested in mechanical things such as the push lawnmower. It took several hours to cut the grass around the house. Even at this young age I found it irritating having to lift a heavy sheet of canvass that covered something as we didn’t have a shed or garage to store anything in. The irritating article in question was the Rory O’Brien, it had been abandoned but not forgotten during this period in its life as it was being partially protected under tarpaulin. Years later we moved to a bigger house with a garage. I was heavily into motorbikes at the time, but the Rory O’Brien stood there haunting me with its now rusty patina. “Yikes!” its time for a bike restoration, I thought.

The bicycle was bought out onto the workbench and everything was stripped off of the bike. The frame was sent off to the chrome platers to have the lugs and fork ends plated. The rest of the rusty and rotten aluminium parts were trashed and replaced by the latest up to date circa 1980’s Campagnolo parts. The bicycle, now complete, was spray painted in cream, with it’s lugs resplendent in new chrome and outlined in gold. It was the first and best restoration job I thought I had done. Dad enrolled me in several cycle racing clubs and I became a competitive time trialler. I also took the bike to Austria, tackling some of the steep mountain roads and passes up into the Alps.

After 30 years of use and one fork collapse at Stotfold traffic lights, I thought it was time for a proper period parts restoration. Here the fun starts, as I have become a bit of a perfectionist in all my restoration projects. All of the parts I had thrown away and replaced with Campagnolo parts, now had to be replaced with the original period stuff. This had to be done from memory. EBay came to my rescue in the replacement of original parts. I remember that the seat was Brook’s competition with really big rivets. The gears were three speed Sturmy Archer, which was the fashion at this time. This would be the only compromise that I was willing to make, as there are so many good Derailleur changers and gears in this period of cycling. Dad probably couldn’t afford all of to notch additions at the time. The wheel hubs were manufactured by a company in Birmingham called Harden. The brakes were made by GB as were the levers. The wheels or rims were early Mavic alloy ones.  The handle bars were made by a company called Randonier and the stem was made by GB Hiduminium. The bottom bracket was manufactured by Baylis Wiley, the peddles were Brampton “B8s” and the chain ring gears were simplex double chain ring. Bearing in mind all of these parts had been ditched.

Here is an account of the cost of replacing parts that I had thrown away and replaced with more up to date stuff.

All of these parts were purchased on eBay UK with the exception of the simplex double chain ring, the simplex Derailleur and the Christophe toe clips, these parts were found on eBay France – small ads ,which can’t be found on eBay UK worldwide search. Every part purchased had to go though some sort of restoration, be it a quick polish to a re-chroming job, except for the Brampton peddles that were unused and very greasy in their original box. They were purchased from Hillary Stone, who deals in very fine quality products for the discerning restorer and cyclist.

Another part that I kept in mind was another frame and forks as my forks had been brace repaired. Occasionally I would look on eBay not really expecting anything to crop up. But to all my surprise a frame and forks did appear and I put this on my watch list, it looked exactly the same as mine, curly lugs and all. I eventually won the bidding at £255. On receiving it I first looked at the frame number 189, unbelievably mine was 183. The only differences were the agrati dropouts and the centre pull brakes. Mine were Juy simplex dropouts and the side pull brakes. The fork lugs were slightly different to mine as they were not quite as ornate. I decided to scrape some paint off and see what was underneath, on the seat down tube I noticed some little rust lines, a little probing and poking with a scriber revealed some nasty corrosion. 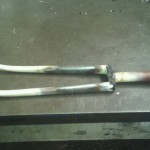 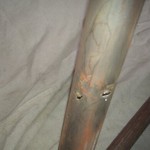 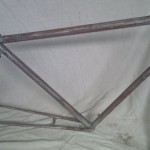 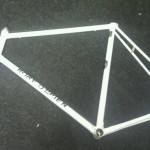 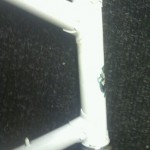 This is a different frame with nervex proffesional lugs fitted.

This was due to a cork, I found later, having been forced down the seat tube to stop water getting down onto the bottom bracket which had a shrouding of thin metal foil wrapped around it. The corks essentially acted as the base of a moisture pond, hence causing the corrosion. “strange what some people do”, as I did when I threw all the original parts away. The repair was affected by making a tube of steel that could be driven down to the corroded area and then be brazed into place, the braze being run into the rust holes so securing the piece of tube that I had made. After brazing the stem was fettled to produce a completely invisible repair ready for painting. The centre pull brake tubes where then sweated off and a couple of cable brackets were welded on to bring it up to my bikes specification. The whole frame was stripped off paint using nitromors and wrapping of cling film to keep the aggressive fumes of the stripper working on the paint.

With the work completed it was now time to get the frame and forks down to the chrome plater. I use Doug Heath In Baldock for chrome and nickel plating as he has an understanding of how delicate the operation of old lug plating is. A plater can polish the lugs to such a degree that they look great, but have no strength in them and after the bike has had some miles put on it you will soon see the stress fractures in the chrome finish. There is a compromise in as much as “do I chrome the lugs or do I paint?”, if the lugs are quite pitted with rust one has to think about painting them. Once the lugs are weakened you will only have a frame that is only worth looking at, not using. Doug Heath will tell you whether it is platable or not.